PCLN: the near Holy Grail of non-directionals

On Friday, June 13, 2014, PCLN was poised to be the Holy Grail of non-directional options setups. It had everything going for it, except for one detail...

The Good:
1. Difficult to digest news comes out at 8am est. saying PCLN was going to acquire OPEN at a hefty 47% premium. By difficult to digest, I mean that it's going to take more than a couple hours of research to revalue PCLN stock, contrary to what the armchair analysts on twitter may think. Even though this represents "only" about 4% of PCLN market cap, it's still a fundamental company change.

2. Since this news was announced 1.5hrs before market open, there was limited price discovery in the premarket both in overall trade volume and time (ineffeciency).

3. Weekly options expiring the same day, open with Implied volatility at 24%. The option market is treating this as just a regular day in the life PCLN. However, this news is akin to a quasi-earnings event. I can't even tell you how excited I was to see it open with IV at 24%, it was literally like a gift from the volatility Gods.

4. News comes out on a weekly Friday opex, almost all the theta is sucked out of the options and our boy gamma takes the spotlight.

The Bad:
1. Option illiquidity. I'll say this, if I'm not getting filled, no one's getting filled. I got filled on only one of the 1225/1235 strangles I wanted and I wasn't being cheap with what I'd pay for the offer. This was within the volatile first five minutes of trading  Once filled, I was up almost immediately 30%, a true rarity in the long strangle world. This was due to a spike in IV after my entry as well as the stock beginning to trend down. Exiting proved not as difficult as entry, but it wasn't easy either, for a stupid one lot no less.

I ended up taking my profit at 69% within 10minutes of initiating the trade. On a day like this, I typically like to leave it on to EOD when funds come in and either buy or sell based after using the morning to evaluate the news. However, I closed out early. Had I left it on, I would have cleared an additional 300%

Furthermore, on days like this it's not unusual at all to swing strangles. I'll try to open one off the bat (if I think IV is too low, straight IV play) and then may look to strangle again around lunch time after IV tamps down before any EOD move. Also, strangle entry off the open may not happen if the stock moves too fast, which is another reason why I was only partially filled. Generally speaking, there will be time for re-entry later in the morning. If I can't get filled off the open, I'll wait until the stock begins coiling on the 5minute or wait for it to trade flat for a while. That indicates to me more indecision, it's like a stock market eddy. Unfortunately for me, my schedule precluded a mid morning or lunch re-entry. Had I done so that also would have been profitable on this day as well.

Obviously a trade like this is not going to work every time and a lot of time you'll have to stomach looking at being down 25-50% before a strangle works, which is why my stop is typically EOD as opposed to a percent stop. However, if the options in PCLN were more liquid and devoid of the monstrous bid-ask spreads, which affect a strangle something fierce, this truly would have been the Holy Grail setup of a day swing non-directional. 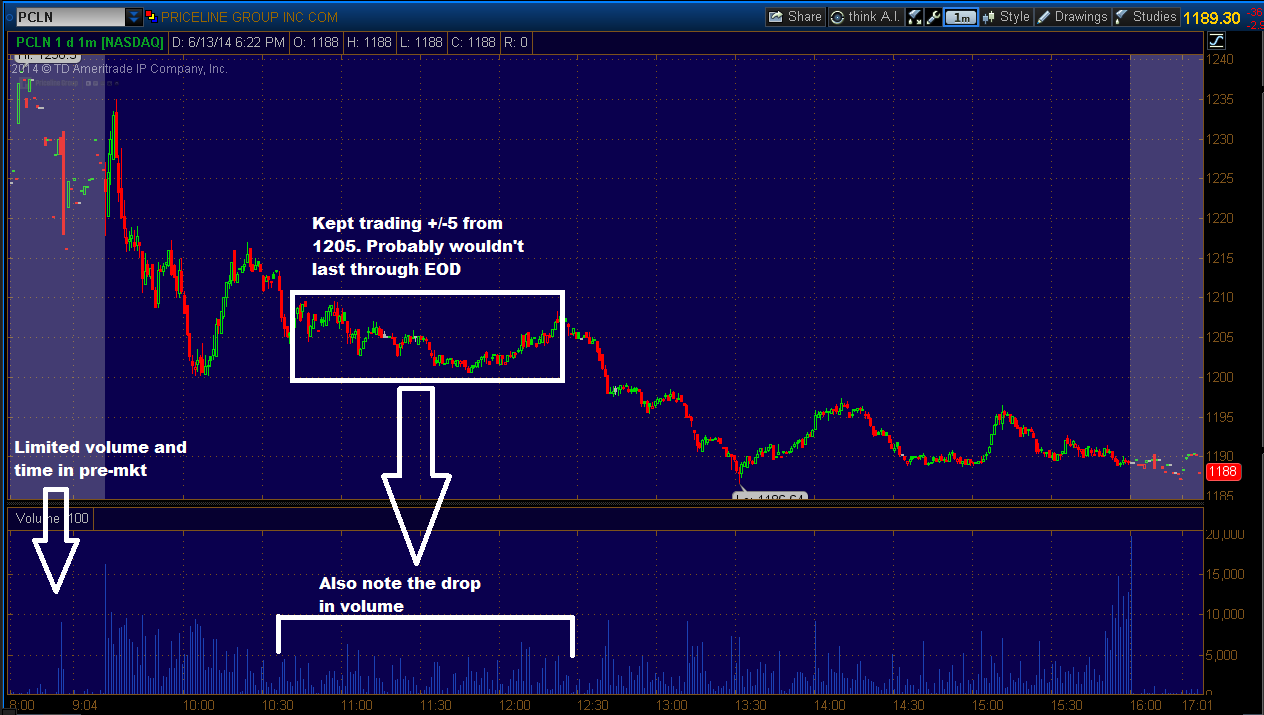 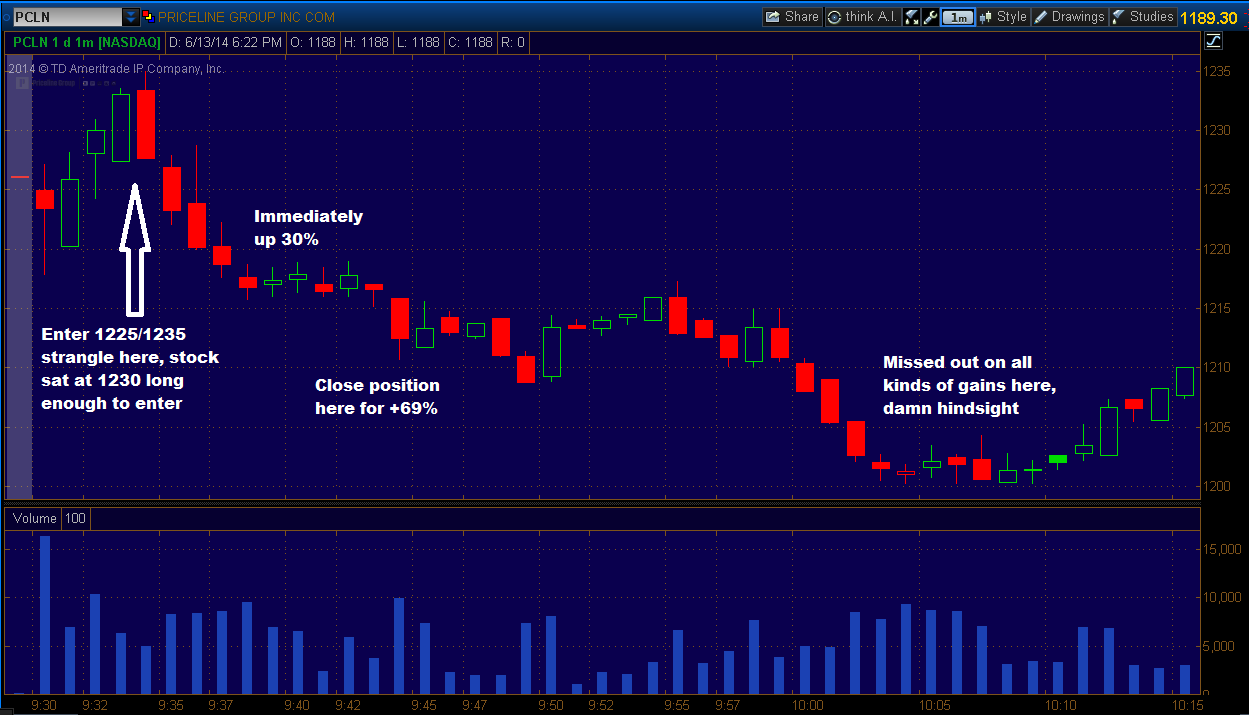 Posted by TradingTrooper at 8:28 AM