Finally the market took the elevator down after the FOMC minutes came out around 1400hrs, not that the tape was really strong to being with. The /ES opened at the day high of 1527 and crept down to 1519 by 1200hrs. It was somewhat rangebound until 1400hrs when it hit 1522 after the FOMC minutes were released, only to tank to 1507 by 1600hrs, or market close.

$OMX $ODP and $SPLS all got faded HARD. OMX and ODP botched the release of their merger, then had to re-release it. Investors hated it and dumped both stocks. $SPLS got faded like it should have been , with the March 14 puts going from .40 to .95 by market close.


$GOOG traded higher immediately off the open, but then sold off hard. I had considered the 795 puts when the stock was consolidating at 804 right around 1110hrs. The reason being was that the overall market was weak with a lot of names in the red and I felt that after the sick run GOOG had been on, it could be time for a pullback. Sure enough, it ticked back to 797 by 1135hrs.

$SINA ended up fading post earnings, though I really had no clue on what the trade was.

$KORS is another, I assumed it would trade higher because a lot of talking heads were saying that it presented a buying opportunity. Unfortunately the weak market kinda kicked that idea in the shins.

I made a trade in $GMCR when Benzinga reported takeover chatter from Nestle for 65 a share. This literally went nowhere. Had I done a simple twitter search instead of instantly buying an OTM 47 call, I would have realized there was all kinds of hours-old GMCR twitter buzz. I was in it for about 20 minutes before I called it.

On the other hand, $JOY crushed it off the open on renewed takeover chat. The rumor changed from GE to a company in Europe. The 65 calls closed at .10 a day earlier and opened around 1.40 or some non-sense. Even the 67.50s were playable off the open.

Lastly, another trade I eyeballed but didn't make was fading $PCLN around 1440hours. Every other stock was getting kicking in the nuts, except PCLN which was trading in a range around 697. I had considered going in on the 690 puts but held off, only to see PCLN tank to 688 within the next hour. Oh well. 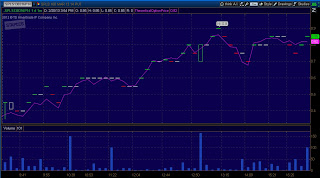 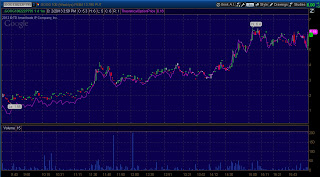 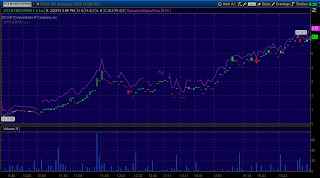 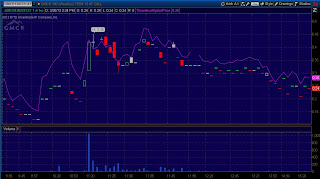 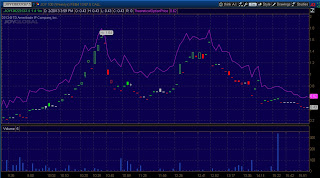