Why Snapchat Vol Was Underpriced and Probably Still Is

I posted a video yesterday looking at volatility and an April straddle in Snapchat. This is the *somewhat* abridged version of that video.

1. Has been trading for about three weeks now. In February, the banks were shopping a price of $14-$16 a share, they settle on $17 a share for the IPO.

5. In other words, SNAP has seen some wild realized volatility in the 12 (trading) days since it IPO'd. 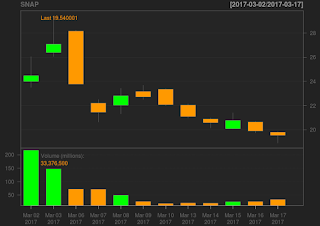 6. Despite all of this realized volatility, the options pricing hasn't moved. In fact, volatility has decreased with the April straddle now marked at 50% vol, pricing a move of +/- 12.4% by April monthly expiration.

Sometimes the past is prologue:

I think to get an idea of how Snapchat might trade going forward is to consider how it has traded thus far and how the IPO was shopped a month ago. Also, I think it's worthwhile to take a look at some recent big name IPO's to see how they fared within the first 6 weeks or so of trade. Looking at FB, TWTR, GPRO and BABA makes me think that Snapchat is probably in for similar volatility in the weeks to come.

FB came to market at $104b and lost 1/4 of its market cap within the first few weeks of trade: 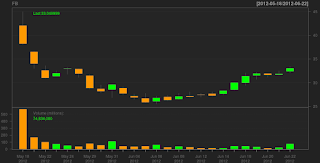 BABA came to market at $170b and showed some decent realized volatility relative to how big of a company it was within its first few weeks of trade: 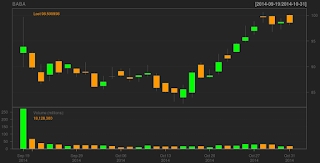 GPRO's IPO was much smaller, pricing the company at about $3b. Here's how it traded in its first few weeks: 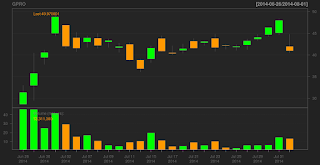 Probably the best proxy for how SNAP might trade is TWTR after its IPO. I only say this because they're somewhat similar businesses and their market caps post-IPO are similar at $24 billion'ish. 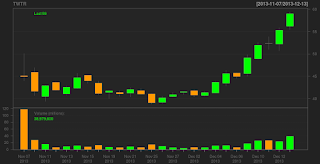 Obviously, these stocks experienced some decent realized volatility within the first six weeks of trading. I don't see why Snapchat would be any different, but I could be wrong.

Other Considerations for an April SNAP Straddle:

1. The quiet period ends on April 11, 2017. The stock could see some decent volatility when the company and the IPO underwriters can comment on the company.

2. An article by Julia Boorstin at CNBC states the following:

"In April, there will be another milestone that will be sure to move Snap's stock: Its first quarterly earnings report. There's no date set yet, but the company's on a traditional calendar, so it should come next month."

I'm calling shenanigans on that since there is nothing to that effect priced into any of the April options expirations. However, should Snapchat come out with anything related to earnings after the quiet period ends, I'd expect the stock to be pretty volatile.

Based on the realized volatility of Snapchat thus far, I think the April monthly options are cheap at +/- 12.4%, or 50% vol. Consider how the other "hot stocks" had traded after their IPOs and Snapchat vol looks extremely reasonable. Throw in the fact that the April straddle includes the end of the quiet period. Sprinkle in a small chance of anything earnings related coming out by April opex and I think the straddle at +/- 12.4% becomes a bargain.

Of course I could be 100% wrong about all of this. I suppose we'll know come April 21st!

Here's the long-winded video I posted yesterday regarding the April straddle:

Posted by TradingTrooper at 9:30 AM