Be forewarned, I'm shooting for the jugular on this ACTG trade. An OTM put spread fired off on it a couple a days ago, with the Jan 17.50 calls bought 3800x while the Jan 15 calls were sold 3800x for a net debit of .65, or $247k in premium paid. A quick glance at the quarterly cash flow shows that the $1B co. appears to be hemorrhaging cash. For the past four quarters, it shows negative retained earnings and produces negative EPS, and its cash and cash equivalents have declined quarter over quarter.

In spite of the company's inability to save any money, they still manage to pay a 2.5% dividend, which equates to about $24.3mil/yr (48.7m shares in float x .50). I have no connection to this company whatsoever and am only speculating here, but based on the OTM put spread and lack of retained cash - the dividend could be on the chopping block when earnings are announced on Oct 17. If that does happen, watch out below as it cracks support at that $20 level.

It should be noted that they've been losing money since 2010, so this isn't anything new for them and as near as I can tell the only thing going for Acacia is that they have zero debt. Furthermore, the put spread trader could just be looking of a break through 20 between now and January so the earnings play is a gamble to say the least. Therefore, I could be completely wrong along with the other guy who laid down a quarter-million on a thinly option-traded stock.

I went for the gusto and picked up a few Oct 20 puts for .65. I gave myself no time to manage this trade if I'm wrong, whereas the guy with the Jan put spread has all kinds of time to think up some crazy plan to save his trade. 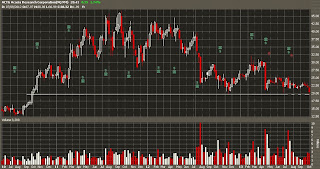 Disclaimer: This is a blog on the internet, it is not investment advice.
Posted by TradingTrooper at 9:49 AM